skip to main | skip to sidebar

Below is an article that was published in Flash magazine (Issue 3, Flash, 2004). I was asked to write a piece to coincide with my first solo exhibition in Melbourne at the Centre for Contemporary Photography. It was supposed to be a reflection on the power of photography, but really, it gives a small insight into the story I was trying to tell. Even then, when I was young and free;) 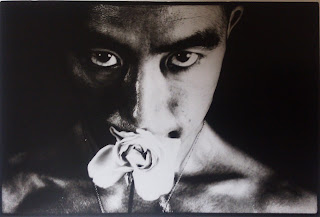 I first met Yukio Mishima in October 2000 in a dusty little bookshop in, of all places, New York. He just happened to be sitting on some Andy Warhol books, all dishevelled and creased, as if, someone had just ravished him then plonked him back down, discarded. He had his head tilted down but he was looking up, and when our eyes locked he gave me the most intensely soft gaze. He had thick eyebrows and a handsome face shaded in shadow and light. In his mouth was a rose, and even though I was now holding him in my hands, I wouldn’t be able to tell you what colour it was. He was a galaxy away. He had a sincere sadness about him that made me want to hold him, and keep him. I was on holidays, a poor student and definitely penniless, my sister impatiently waiting outside. And so, for the third time in my life, I committed a small crime. I hid him under my green leather jacket and I stole him.

I didn’t know it at the time, but my bid for Yukio was too late. From this introduction I became what some people have described as a ‘tad obsessive’. I prefer to describe it as ‘interested in learning about someone else’s life.’ The truth is, both descriptions are probably right. I learnt that he was a celebrated literary figure, who was nominated for the Nobel Prize for literature three times. He was the author of some 40 novels, poetry, essays, and modern Kabuki and Noh dramas. I learnt that his real name was Kimitaka Hiraoka, changing his name so that his anti-literary father would not know about his devotion to writing and when I discovered that Yukio, in a blaze of passion had committed seppuku (a ritual suicide involving disembowelment) in 1970, I mourned for him, as if he had played a truly instrumental part in my life and in a way, he did.

My meeting with him, some three decades after his suicide, has served to remind me of my own at times disdainful view of humanity, and yet, it has also served to remind me that life can still be beautiful. I admit I do have a romantic view of the world. But as a child of war from a family of refugees, my biggest fear is that I lose sight of this view. After all, a young Frenchman volunteering his time and risking his life to work in refugee camps along the Thailand/Cambodian border in 1979 held that very same view when he came across a family of ten, who managed to escape and remain intact despite a war. It was this same view that drove the young Frenchman to make a huge difference in this family’s life, and he did, because within two months they were on a plane to Australia. All because of some foolish view, a view that I will never let go of.

Should I ever lose sight of this view, I will always return to Yukio, with that rose in his mouth and serious eyes and quickly I will recall everything. Today, Yukio sits on my desk but sometimes I will take him out to the beach and we will sit together, like old friends on an old bench, and look out to sea.

Isn’t it a curious thing, that a mere picture manages to move and hold you in a way that some people in this world never will.